skip to main | skip to sidebar

What's a girl to do?
I am minding my own business, mowing the lawn and edging the front beds, when my neighbor Julie shows up with Jose Cuervo and marguarita mix. We got the blender a whirling, and now I am sitting here unable to knit. I'm a good friend..... Yes???
Posted by neverenoughthyme at 7:12 PM 1 comment:

finally finished these socks while traveling to Arkansas and sitting in classes during the conference. 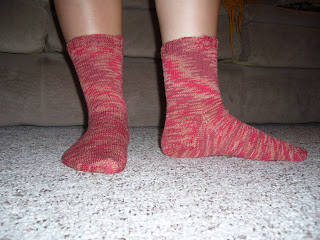 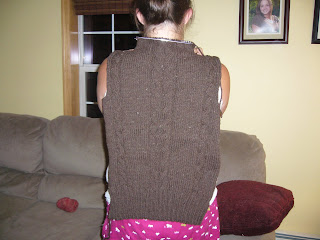 Making some good progress on the Central Park Hoodie. I don't plan on making the hood part, as I'm just not a hood kind of gal. My daughter makes a great model doesn't she? I'm using Vermont Rambouille that I learned about from Norma. (my first link! I did it!) It is wonderfully soft and beautiful yarn. I hate scratchy wool.
I'm saving eggs and cucumbers as Norma and I plan to meet up in Burlington next week when I drop my daughter off at college. I feel like I will be meeting a celebrity! What can I say, I lead a sheltered life.
Posted by neverenoughthyme at 8:09 PM No comments:

What a fabulous day! The first time I have been in my pool all summer for a bit of floating. I hit the garden first thing this am before it got too hot, and picked and picked and picked. I have been gone to R-Kansas for a few days, so the cucumbers and beans were waiting for me. I picked 20 cukes, and a bucket of beans. Luckily, my neighbors enjoyed the harvest as much as I did. For dinner tonight, we had green beans, potatoes grilled with green pepper and garlic and of course cucumbers. ALL from my garden. I love that! I then hit the woods and picked 8 cups of blackberries and made a marvelous blackberry cobbler for dessert. Hot from the oven with vanilla ice cream. Yummy.
My SIL is in port for a few days, and is able to call my daughter and talk to her. She misses him terribly, and is always happy to be able to be in contact with him. Our men in the military sacrifice so much. Being on a submarine is tough. No phone calls, mail etc. Anthony is such a great guy!
Posted by neverenoughthyme at 7:57 PM No comments:

Well, here I am in R-Kansas. I have to say this is not my favorite place that I have ever visited. There is NOTHING to do here and I mean nothing. Some of the girls went to Wal-Mart yesterday. Wal-Mart!!
Susan and I have been having a ball practicing our southern accents. She is hysterically funny and was the hit at dinner tonight. Dinner was at The Whole Hog, which has won several awards for their BBQ. I have to say it was pretty good, although the choice for wine, Ernest Gallo in small individual bottles was not impressive. And I am not a wine snob, but come on.
The hotel has a free shuttle to the convention center, unfortunately, it is never available and you can't reserve it.
I did see 2 old friends from San Diego that I haven't seen since 1988. My first boss in LTC. That was fun.
I attended 2 good classes and 2 bad ones, so I got to finish a pair of socks that I had been working on for a few months. Luckily, I brought some more sock yarn so will start another pair tonight to work on if I get another dud tomorrow.
All in all, I can't recommend Arkansas for a travel destination. Not at all.
Posted by neverenoughthyme at 9:59 PM No comments:

Hell seems to be the common theme.....

The neighbor from hell.....
is making me very angry!! The house across the street has had 4 families in the last 8 years we have lived here and this family is by far the worst. We have a 2 acre lot, which in the summer is very private and can't be seen from the road when all the trees leaf out. You've all seen the pictures of my great dogs. Seems the neighbor from hell doesn't share my fondness for the dogs. About 2 weeks ago, I received a letter from the Animal Control Officer stating my dogs were roaming the neighborhood at will, causing property damage and routinely pursuing pedestrians. I was shocked!! I was worried. What had my dogs done to my neighbors that I did not know about. What had they damaged? Put a call into my friendly ACO, who stated that she had a complaint that my dogs were chasing a neighbor who jogs. Not true, I explained to her as I know all my neighbors, and no one jogs. We live on a private road. Was the complaint from someone coming up our road who doesn't live here? Nope! It was from the neighbor from hell, who said his daughter is not comfortable with the dogs when she jogs. (she is obesely over weight and hasn't jogged a day in her life!) What had they destroyed, I asked? They urinated on flowers. Hmmmmm. I was a bit perturbed that they hadn't given us a call to discuss that they had concerns. Certainly, I want to be a responsible pet owner, and would do anything to prevent my dogs from bothering someone.
Enter my darling husband, who decided to approach neighbor from hell, in his direct and untactful way. He picks a saturday, when neighbor from hell's son has his devil band over practicing their devil music in the driveway. (not something you want to listen to on a Saturday, or any day for that matter).
DH says to NFH, "if you have a problem with my dogs, I wish you would just give us a call instead of calling the ACO, after all that's the neighborly way to handle it." NFH responds, "I didn't call anyone and we're not neighbors". Oh, this is going well. DH says, I talked to the ACO and she said you called. oops, busted!! DH asks if son can tune down the band, NFH responds, NO. NFH responds his son will play his drums anytime he wants. GREAT.
Today, I get a call from ACO that they have had another complaint on Monday morning at 7:30 am that my dog was standing in NFH's driveway at 7 am. He wasn't barking, biting, chasing anyone, peeing, crapping or digging. He was standing! Next time the NFH calls with a complaint, I get a ticket and a fine. Funny, but my dog was inside with me as I was getting ready for work and don't leave till 7:30 myself.
What recourse do I have for someone filing false complaints? I wonder if this is retaliation? I seem to recall my daughter and NFH's son going on a class trip to Washington DC. Seems NFH's son was goofing around in the subway station and blocked my daughter from getting on the train. She is 16, standing in the subway alone, with all her classmates and chaperones on the train and she is stranded, calling me at work crying, because she doesn't know what to do. I never complained, or said a word about this to NFH. The chaperones complained to the school and NFH's son was suspended from school for 2 days upon his return from Washington. What do you think?
Guess it's time for an invisible dog fence.......
Posted by neverenoughthyme at 8:16 PM No comments:

I am in sweater hell!! I had been knitting socks like a crazy woman, and have more than I can wear or give away, so I thought I would try a sweater. I used to knit sweaters in college but usually did the sweaters on round needles, so no seaming.
sooooo.....
My vintage cardigan is giving me fits. I had finished all the pieces, and tried to do the neckline, but kept getting these crazy bunches in the front. I tried 3 times to make them go away, no luck. so I ripped, and I ripped. picked up the stitches again and tried one more time. It looked like the flash dance sweatshirt. NO good. So I ripped again. This time I went half way down the front, and will try and reknit the front pieces and back again. If it doesn't work this time, it's totally being ripped out turning into a pullover. The yarn was expensive, and will not be wasted.
Sweater #2 is a raglan sweater made out of cotton yarn. My sister had made this great looking sweater and my daughter loved it. She said she would make it for my daughter if I bought the yarn ($100 later) and if I seamed it when it was done. So this afternoon, I spent the entire afternoon and evening sewing the GD thing together, only to find out it is way to big for my daughter, and even too big for me.
SOB, I think I'll stick to socks.
Posted by neverenoughthyme at 10:11 PM 1 comment: 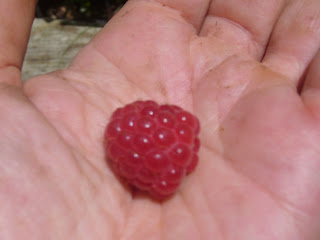 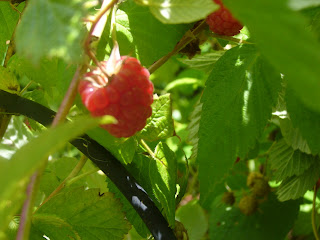 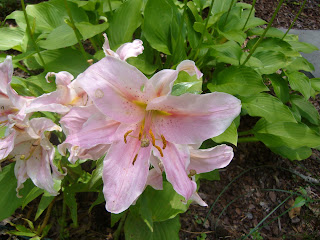 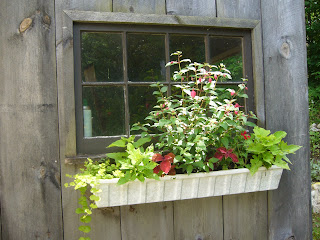 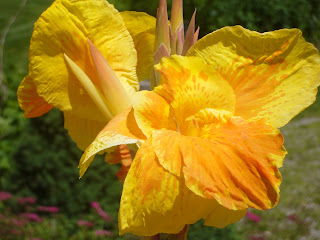 The question now is:  flowers or veggies?  I have more flowers but after reading Norma's blog, I am seriously wanting to increase my veggie beds.
The raspberry's are coming on strong right now, and the black caps will be ripe any day.  My beets are looking good, but I don't know how big to let them get before I pick them.  I can see the tops and they look to be about 2 inches across.  Big enough, or wait??
Lillies are blooming.
The window box behind the garage.
And look at this Canna Tropicanna!  Isn't she a beauty??
Posted by neverenoughthyme at 7:05 PM No comments:

neverenoughthyme
Mom of 2 beautiful and wonderful daughters, 2 handsome dogs, 2 funny cats and a garden full of flowers and veggies. I love dirt!!